Sunday 23rd October 2016
'All 42 girls arrived at Down High at 2am on Sunday morning, tired yet very excited. We loaded the bus and  began our journey to Barcelona!! The girls were given their goodie bags including flipflops, sunglasses and caps on the journey to Dublin Airport. After a bumpy flight which involved a slight detour round France due to Strike action we all arrived safely. On arrival at the hotel we headed straight to the beach promenade for lunch and to explore the area. The beach was beautiful just like the weather! After lunch some serious team tanning continued back at the hotel before we headed off to our first match. The U16s lost 2-1 and the U18s had a narrow 3-2 defeat both against top local side Castelldefels Hockey Club. The day ended with showers and dinner before bed, an early night was needed by all as we prepare for another busy day tomorrow.'

Monday 24th October (part 1)
With a slightly earlier start of 8 o'clock, we rose from our beds excited for the day ahead and got ready for breakfast at 8:30a.m. We were greeted by a selection of donuts, which made our day... after breakfast we went up to get ready for our coaching masterclass with the aim to be ready for 9:40a.m, but some people didn't quite manage this and the birthday girl Ellen Brown ended up having to wear the tour sombrero as a forfeit. We then travelled  to our professional coaching session at Junior F.C. We had a briefing with the two coaches about tactics and drills. We split up into our 3 teams and went to our separate pitches. 1 team had a Spanish coach, George and the other 2 teams had an Australian coach, Tim. For the next 2 hours we went through a variety of drills and set pieces that they had showed us in the morning briefing. Everyone learnt a lot, including the Down High coaches, the session was very beneficial and the added benefit of glorious weather was definitely a bonus.
​
​
Monday 24th October (part 2)
After a thrilling international hockey training session, we had a stop off at a supermarket! Everyone bought their lunch, including some chocolate, sweets and donuts (they are called 'Floopies' in Spanish)! We were all exhausted but conjured up energy for a pool party! Lots of noise and splashes were made and group photos were taken! We soaked in the sweltering sun hoping for a tan. We all jumped in the pool and took underwater photos with Emily's GoPro! We had a quick change into our school kits, all prepared for our next exciting match, hoping for a glorious win! 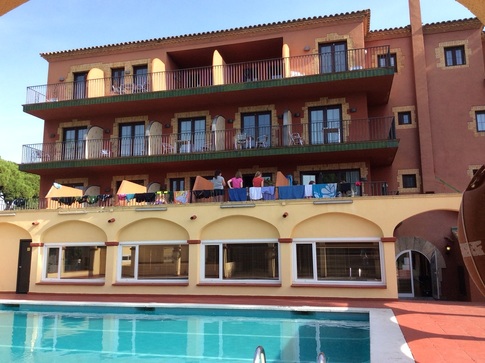 Monday 24th October (part 3)
The 3 teams departed for their evening matches after a relaxing afternoon by the pool. The U18 team headed to Terrassa to play Atletic Terrassa Hockey Club while the U16 A & U16 B teams returned to Junior FC Hockey Club to play their U16 team. This was a very successful evening with the U18 team winning 9-0 & the U16 teams 3-0 & 0-0. The girls thoroughly enjoyed all their matches and at both venues the host team provided dinner. It was a great experience getting a chance to taste some local cuisine.
Tuesday 25th October (part 1)
This morning we travelled to Barcelona to do some sightseeing. We met our guide Sandra who was going to help us explore this amazing city. We visited many different parts of the beautiful city including the Olympic park and Olympic Museum as well as the famous Las Ramblas and La Sagrada Familia. It was at Las Ramblas that we had some free time to walk around and get some lunch before having to head back to the bus. We finished the tour of Barcelona with some songs for Sandra including one of the tour favourites, Irelands call. After Sandra left us we headed straight to our evening matches bypassing Barcelona Football Club's Stadium, Nou Camp!

Tuesday 25th October (part 2)
Again this evening we played our hockey at 2 separate venues with the U18 team heading to Junior FC Hockey Club and the U16 teams headed to Real Club de Polo de Barcelona . Both venues were extremely impressive sports facilities, but particularly the Real Club de Polo de Barcelona grounds. This sports facility is used to host many international equestrian events and is also the home to the Spanish Hockey Team. All 3 teams played extremely well but were unfortunately beaten by their opponents. U18 Lost 5-1, U16A Lost 6-4 & the U16B lost 3-0. The standard of hockey played by everyone was outstanding and we all learnt so much. We headed back to the bus to make our way back to the hotel for dinner, but not before stopping off at Nou Camp for a quick picture.
Wednesday 26th October
Today we said goodbye to our tour guide Anna who had been with us all week, she had been brilliant. If we had any questions she was able to help. She spoke to all the bus drivers, hockey coaches and hotel staff making sure our tour ran as smooth as possible. Today was also the penultimate day of tour and we headed to Portadventura World Theme Park. It was the first day we haven't had any hockey and we were looking forward to getting to go on the rides. Some of the girls had been to the theme park before in junior school but that didn't matter we were all so excited. The teachers give us a series of instructions about places to meet and how much free time we had before we set off to try as many rides as possible. There are a variety of rides for a variety of people, ranging from the 'Tea Cups' to the Shambala, which is the largest roller coaster in Europe so there was something for everyone but we all got as involved as our bravery would let us. It was an amazing day with amazing friends & teammates and even the teachers took part in one of 2 rides as well. Definitely a great way to finish off a great tour.
Thursday 27th October
Today was the final day of tour, we had an early breakfast and packed up the coach to head for Barcelona Airport. There definitely wasn't as much singing on this bus journey as there had been on previous bus journeys as we were all so tired from a great 4/5 days with our teammates. We arrived at the airport in good time and got our luggage checked in. We were given a bit of free time to make any last minute purchases from duty free before we made our way to the departure lounge. The flight left on time and most of us tried to sleep on the plane journey to Dublin. When we arrived in Dublin we found our coach driver and made our way back to school. This was a great trip with a great bunch of girls. Thanks must go to the teachers, especially Miss Heaney for organising a very successful tour. 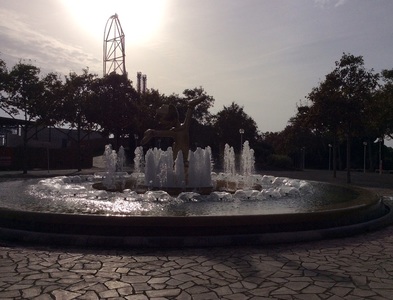